Gnarly, half-rotten, old trees are precious. We need to cherish them,’ writes the philosopher/environmentalist George Monbiot, in a recent ‘Guardian’ article. ‘Big old trees are the keystone structures of forests on which many species depend.’ This brings to mind the wonderful old tawa, rata and rimu to be seen at Maungatautari, and if you walk to the tower in the Southern Enclosure you can get up close and personal with such ecosystems (see picture). You can see the vines, the epiphytes, the mosses, lichens and fungi that flourish on these giant trees. What you don’t often see are the creatures that make their homes there; kaka, morepork, saddlebacks and even tiny rifleman nesting in rotten hollows, bats sheltering in splits in the trunk, lizards lapping at tiny pools of water in branch forks, weta and the many other insects and their larvae that feed on plants and decaying wood, and become in turn food for larger creatures.

All truly healthy ecosystems, seabeds, meandering rivers, forests, depend on ‘old and gnarly places’; in forests, ancient, even rotting, trees that develop over centuries provide the natural architecture for the slow growth of a rich, complex biodiversity. Replacing an old tree with ‘a dozen saplings in plastic rabbit guards is no more meaningful than replacing [a painting by] an old master.’

This got me thinking about what we do in our towns when we talk of the desirability of providing habitat for bats and a diverse range of insects, lizards, and birds. It is not of course a natural forest environment, but to be in any measure successful it surely requires us to pay more attention to the vital importance of retaining wherever possible our big old trees, both native and exotic. 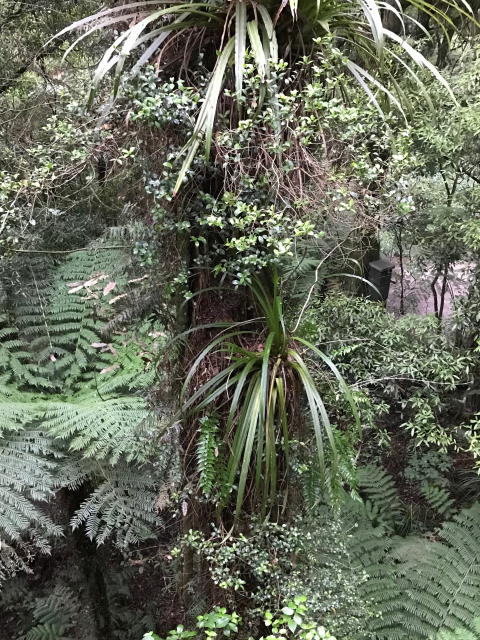 Alders, whether from Europe, China or the Americas, are humble trees, often going quite unnoticed, except perhaps in winter when their dark silhouettes, adorned with tiny cones, are outlined at the water’s edge. They are the only broadleaf to have cones, but it is their sticky buds and twigs which earn them the name ‘glutinosa’. In the wild their place is boggy bottoms, and since wooden clogs went out of fashion (if they were ever in fashion) it seems nobody has wanted their timber. Never mind that half of Venice is built on alder piles, and that the city state in large measure owed its mercantile and military might to alders – but more on that next month!

In the Waikato, we see them growing at their best along riverbanks, sometimes reaching up to 30 metres. And there is a very good reason for this. They are unusual as a tree in having a symbiotic relationship with nitrogen-fixing bacteria that live in root nodules, sometimes as large as an apple. In exchange for sugars, these bacteria create nitrogen fertilizer for the tree, enabling it to flourish and invade waterlogged ground. Fallen trunks will rot quite quickly in the presence of air, but if they are submerged the wood is stable. A smaller variety, the cut-leaf black alder (Alnus glutinosa lacniniata) grows to about 10 or 12 metres and can be an attractive garden tree. . [ Around the World in 80 Trees and Hugh Johnson’s International Book of Trees] 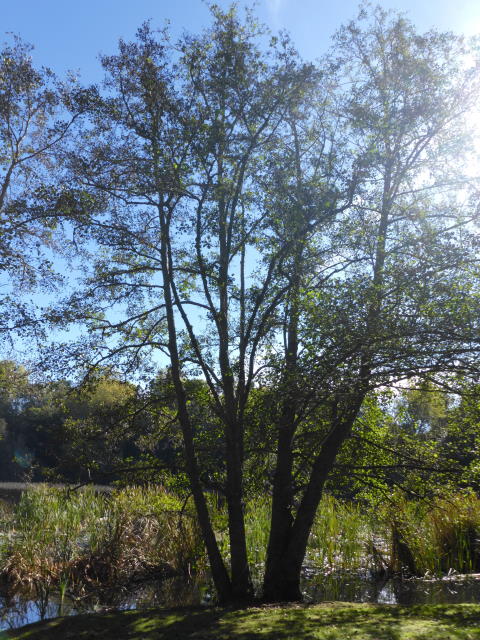 Introduced in New Zealand in 1914 for the purpose of river bank stabilisation, alder has become almost a weed species along riparian areas of lakes and rivers, especially in the Waikato. But since the twelfth century this humble tree has literally been the foundation of the city of Venice, structurally, economically and militarily.

In air alder logs rot quickly, but when completely submerged in water they retain their compressive strength for hundreds of years. Venice is built on marshland; after systematically walling off and draining small areas, the city engineers drove alder piles through the mud and into the subsoil, using nine logs for each square metre, with the tops well below the lowest tide. Layers of crushed brick and stone were then poured around the piles and thick larch planks laid on top. While the largest stone buildings needed thicker oak piles, much of Venice, including the Rialto Bridge, was built on alder piles.

But the story does not stop there. Venice subsequently became a great military and mercantile power, thanks largely to the alder. Its timber yields the best quality charcoal for manufacturing superior gunpowder, which could fire cannonballs further and faster, and make grenades more destructive. Furthermore, alder burns with a heat fierce enough to smelt iron for making tools and ship components. By the late fourteenth century the foundry area, or Arsenale, had become the world’s biggest industrial facility, where 16,000 workers produced armed ocean-going vessels at the rate of one a day. Large swathes of forest on the mainland, both oak and alder, were set aside for state use, mapped and controlled by a bureaucracy which supervised the work of lumberjacks, sawyers and raftsmen (who floated the logs to market). [Around the World in 80 Trees] 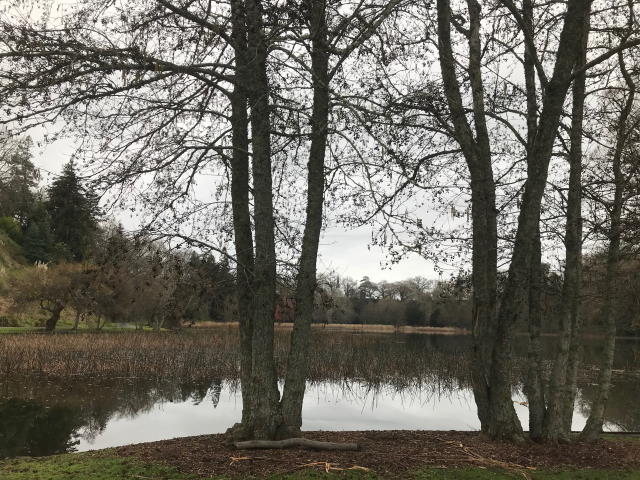 Some of the oldest, gnarliest olives in New Zealand can be found in Cornwall Park, Auckland, but the one shown here is only 12 years old and growing on a hilltop garden near Maungakawa Road. The olive can live 2-3000 years and still produce fruit. The old gnarled trunk can be chopped down and the tree will sprout again from the stump. The undersides of the leaves are silvery due to microscopic scales that reduce evaporation in heat and high wind. Under magnification these scales resemble tiny, frilly, overlapping parasols, about 1/6 mm across.

The olive’s natural range in Europe and North Africa more or less defines the Mediterranean world. These days Spain and Italy are the biggest producers of olives, but in the Middle East it has been used since Neolithic times for food, medicines and oil, for both cooking and lighting. In many languages the words for oil (Italian olio, French huile) derive from the Greek term for olive. Olives for eating are picked both half-ripe and ripe, while olives for oil are always picked ripe. The olive was first taken to Lima in the Americas by the Spaniard, Antonio de Rivera, in 1560.

In Judaism, Christianity and Islam the olive is associated with light, sustenance and religious purifications such as anointings and sacrificial offerings. In the Old Testament story of the flood, it was an olive branch that the dove brought back to Noah as a sign that both the waters and God’s wrath had abated. So the olive branch has also come to symbolise peace. [ Around the World in 80 Trees and Hugh Johnson’s International Book of Trees] 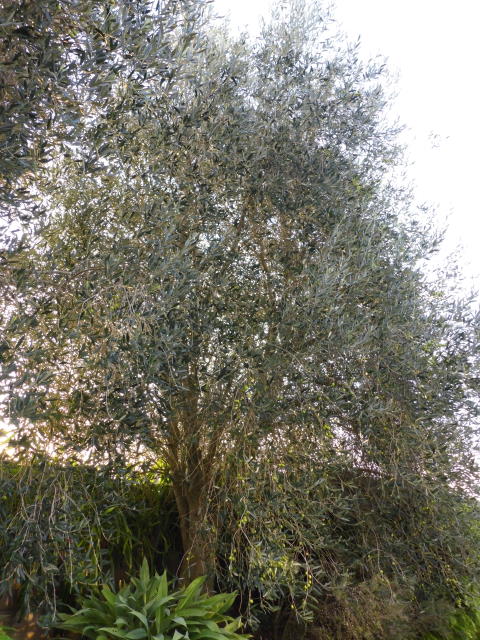 The most widely cultivated of all eucalypt species, this is an ideal street tree; hardy and fast-growing but does not grow large enough to require pruning. When mature it reaches about 35 feet, and in summer its flowers, in shades of pink, red or orange, are humming with bees. The one shown here is on the roadside in Maungakawa Village, whilst the largest specimen in the world, with an enormously wide trunk, grows in Princes Street, Hamilton.

The species is endemic to that world-famous biodiversity hotspot, southwestern Australia, where it is restricted to a small area (by Australian standards) lying between the Stirling Ranges and the town of Walpole. There it grows in low forest in relatively infertile sandy soils, with a temperate climate and low summer rainfall.

It was first described in 1860 by Baron Sir Ferdinand von Mueller KCMG, an extraordinary German-born Australian botanist, who surveyed and recorded many thousands of the plants of Northern and Western Australia and Victoria. He was one of the first to appreciate the structural and pharmaceutical value of eucalypts, and to warn of the dangers of indiscriminate forest clearance. Von Mueller named the red flowering gum Eucalyptus ficifolia, its leaves being similar to those of the ficus or fig. In 1995 Ken Hill and Lawrence Johnson changed its name to Corymbia ficifolia, ‘corymb’ being a botanical term for a raceme in which the flowers grow so that the outermost ones have a longer pedicel than the inner, thus bringing all the flowers up to a common level. In 2009 DNA analysis showed it to comprise a natural group with just two other Western Australian species. 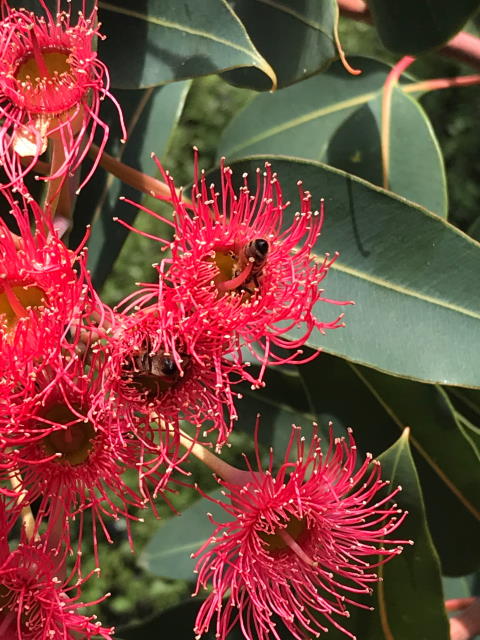 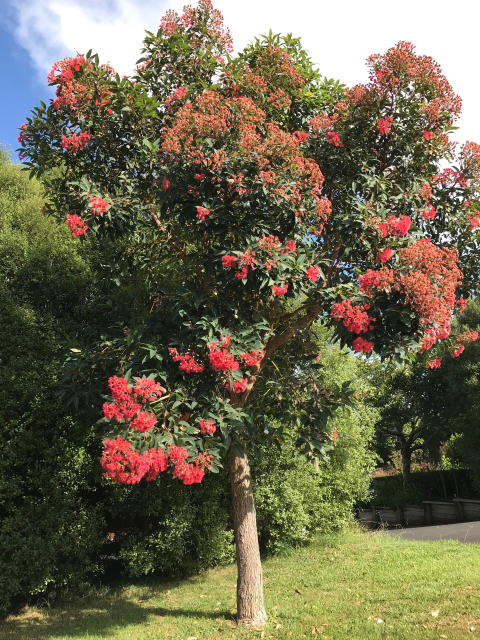 The many varieties of Frangipani, from shrubs to small trees, are endemic to the Americas between Florida and Brazil. Their flowers are most fragrant at night in order to attract the sphinx moth to pollinate them: they have no nectar so as the moth searches fruitlessly for nectar it also pollinates the flowers. In the absence of the sphinx moth, propagation is easy by cutting, and despite their subtropical origins they will grow in suitable spots in New Zealand, as seen here in a Tamahere garden.

The genus Plumeria is named in honour of a 17th century French botanist and monk , Charles Plumier, who travelled to the New World documenting plants and animals. The name “frangipani” comes from a 16th century Italian noble who claimed to have invented the plumeria-scented perfume.

In Mesoamerica, frangipani has held complex symbolic significance for two millenia: among the Mayan people it has been associated with fertility, and among the Aztecs with nobility. In SE Asia it is considered a sacred flower, often used for temple offerings in Hindu, Jain and Buddhist cultures. This raises the interesting question of how and when frangipani came to SE Asia: for instance in Java there is a plumeria relief at Borobudur, which was constructed in the 9th century, centuries before European exploration. In local Asian folklore frangipani is associated with ghosts and demons and death. And finally in the Pacific the flowers are used for making leis, and in modern Pacific culture, may be worn by women to indicate relationship status. 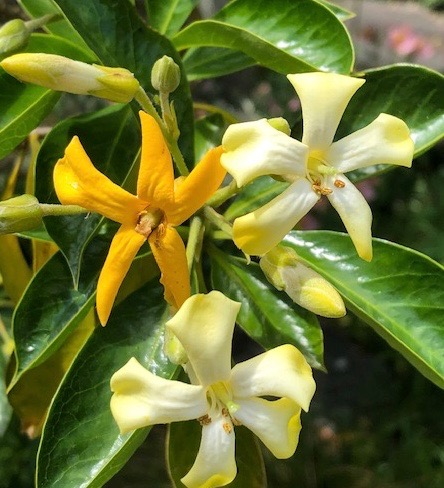 Maples of the World 2

Maples from Around the World 2

Last month I discussed some of the North American and European maples that can be found in Cambridge’s Maple Arboretum, some growing up to 30 metres in height. This month we will look at some of the elegant, smaller maples from Japan, China and Taiwan and Korea, most of which reach only from 4 to 20 metres high. Along with flowering cherries and pine these form the cornerstone of Japanese gardening.

Asian maples are distinguished by the rich range of variations of their delicate leaf forms, and intriguing bark. The arboretum includes several varieties of the popular Japanese garden maple, Acer palmatum: ‘Senkaki’ is notable for its spectacular bright coral stems, ‘Osakazuki’ for its blaze of red leaves in autumn, while the dark red leaves of ‘Atropurpeum’ in summer are outdone only by the deep purple of ‘Trompenburg’. The ‘snake-barked’ maples sport vertical, white, snake-like stripes on their grey-green trunks: they include A. capillipes from Japan, whose leaves are carried on red stems, and A. davidii from Yunnan, China, exquisite in form, with shiny, heart-shaped leaves turning yellow in autumn. The corky bark maple, A. miyabei hails from Hokkaido, Japan, and one of the rarest and most beautiful is the very slow-growing Chinese paper-bark maple, A. griseum, whose rich, red-brown bark catches the light as it peels. A really unusual one is the evergreen maple, A. fabri, from Vietnam and southern China. But my very favourite is A. pentaphyllum (shown): I adore its exquisitely delicate five-fingered leaf-form.

The arboretum is accessed from Thornton Road. It contains more than 35 kinds of maple, some of which are really rare in New Zealand. Do go and enjoy it. 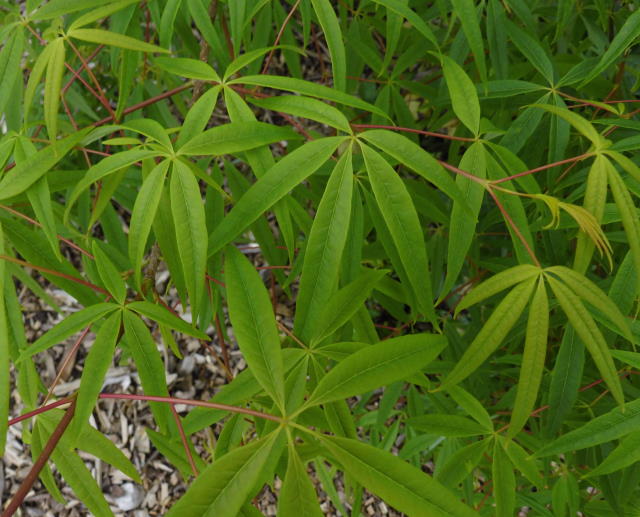