The track through Ann's Patch can be accessed from Albert St, across the road from the Duke St hill. It can also be reached from Gillies St,. down a track beside the fence near Wackrow's joinery. There is a sign "Walkway" showing where to go.

Dr. Ann Pearson worked in the gully at the bottom of the Duke St. hill. The old trees were cut down by the Council, the timber taken out and the debris left to rot.  Ann decided to plant English trees there, black walnuts, silver birch, elms and other trees. She worked on it for a few years on her own until the Tree Trust joined her.  Down the bank, we planted native trees, and around the top we planted a great assortment of trees, including deciduous ones which make a magnificent show in autumn.

Good examples of exotic trees can be found here; their colour in autumn is spectacular.

The Gillies Avenue end can be accessed from Wackrow's Joinery's carpark. At first, Ann and the Tree Trust members would scramble down the bank using the drainage system to get down to the terrace where we had trees, but when Mr. Wackrow extended his building he made a good track for us.  We planted a row of tarata trees along the side of it, as it was bare and sandy.

Year by year we would take a few more tree down and plant them on the grassy bank below the  car park, then we planted along the bank. where there is now a collection of lovely trees.  Cedars, bottlebrush, banksias, camelias, griselinia, pseudopanax, nut trees, and a whole row of pittosporum.

The Council mows the grass along the track about once a month, so there is an easy walk to the other end of the track opposite the Duke St. hill.

One of our members wanted to recreate the huge expanses of bluebells that can be seen in English woodlands. Ann's Patch is the nearest thing we have to an English woodland, so we planted bluebells here to see if they would thrive. The first batch went in in the winter of 2015, and are doing well, despite being heavily trampled on at one stage. Another batch went in this year, 2016, and are also doing well so far. Other batches have been planted since.

Unfortunately, in 2019 a latge group of teenagers decided to use the track for BMX games. The vandalism has set our bluebell project back by several years.

Here are some photos of the bluebells in flower.

The teenagers have grown, and have become more daring with their tracks . The steepness of these tracks isn't all that clear in this example, but it's almost vertical, and 3 or 4 metres high. 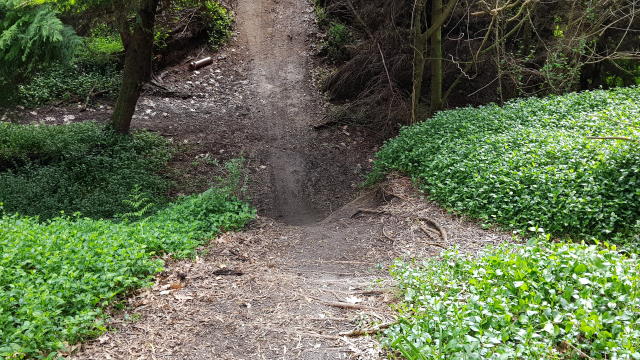