We now have a Thursday group to supplement our Tuesday volunteers.

We have been too successful for our own good. Waipa District Council can not get enough staff to do the maintenance required on our plantings so we have to do it ourselves.

The Thursday group was started by Eric Todd last year, 2017. Some of the more able-bodied of us get together and spray and weed our plantings. The two big ones, Lola Silcock Park and the Meadow Walk, require a lot of maintenance as they are fairly new and their plants aren't big enough to keep weeds down, unlike our older plantings, which are fairly clean. This work supplements the Tuesday group's summer maintenance program.

We spend 2-3 hours in the field, then adjourn to a cafe to put the world to rights over morning tea.

At the Maple Arboretum.

The Thursday group were in Lola Silcock Park, clearing out some over-crowded trees. The truck had been loaded the with prunings; everyone was standing around waiting for Pete and Eric to move their vehicles so that David could get the truck past them and take the load to Greenscapes. As everyone was chatting beside the truck, standing on the roadway, Pete came along in his jeep. He allowed a lot of room when he passed us, and that meant his right-hand side wheels went into the soggy, muddy drain beside the road. This was not a problem for the jeep- it just kept going.

However, when it came to turning out of the gutter it was a different story. The side of the gutter was too steep and taller than the jeep wheels. Stuck! Solution - Pete reversed all the way back to his starting point and tried again. Same result! This time, the wheel rut in the soggy mud was deeper. He tried a few more times, each time with the same result - a deeper rut in the mud. He bulldozed a substantial pile of mud with the jeep's front bumper bar. At that point – the others insisted they pull him out.

The only vehicle capable of doing it was the truck. John’s Surf was at the nursery. Joe produced a good rope, and the truck was hitched up. Even with the load on to give traction, the back wheels of the truck spun, but with a judicious combination of speed and power, Pete and his jeep emerged from the gutter.

The jeep was, without doubt, dirtier than it had been since 1943. Pete washed it at the nursery on the way to morning coffee before there were too many admirers of its mud pack. 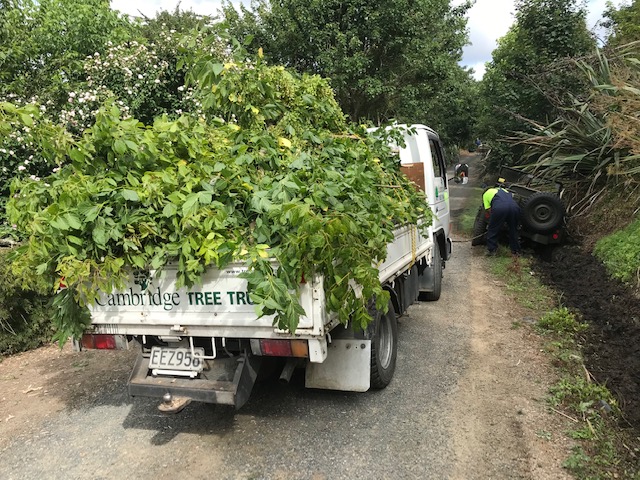 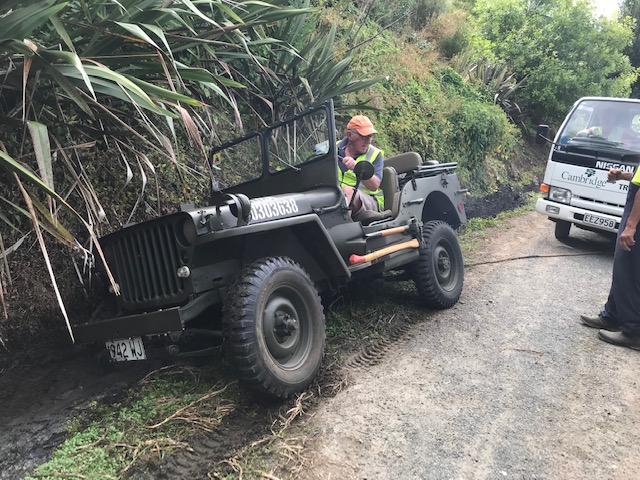 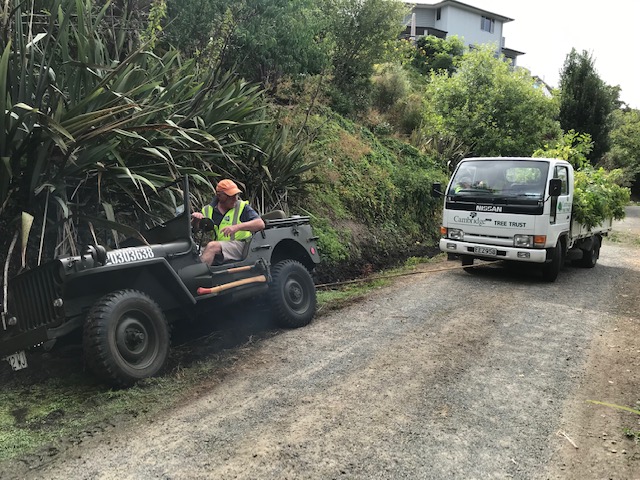 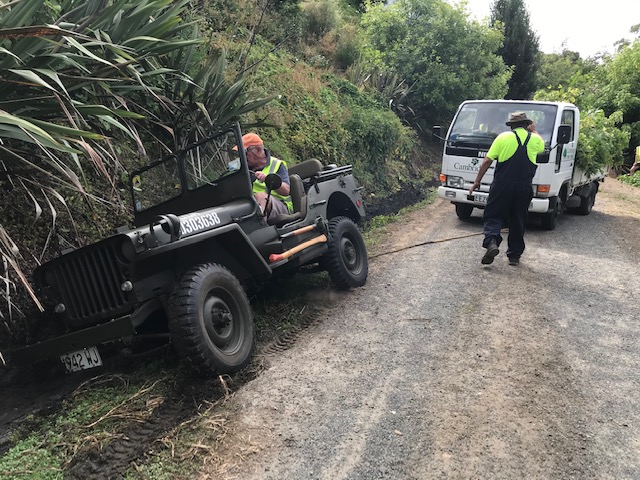 Some pensioners get their exercise. June 8th, 2021

The Thursday group visited Blackie's Bank today, June 9th. We hadn't been there for a while, and the tradescantia had got away on us. It was smothering several of the smaller plants and climbing vigorously over the others. Tradescantia is an excellent ground cover, but sometimes we get too much of a good thing. This little video runs for 2 minutes, but we ran for rather more than that, the cameraman included. Blackie's Bank is below the tennis courts, and forms one side of the steep basin that contains Lake Te Koo Utu. That double o is in place of the macron that everyone else uses, but I don't have one on my keyboard.

The Swale and the Truck

The Swale is a drainage system for stormwater off the adjacent housing subdivision. It was initially in an open field, but the Waikato Expressway now cuts through the field and runs alongside the deeper part of the ditch. The resulting bank is difficult to mow, for reasons that are evident in the video, so the Council asked us to plant it. This section is over a kilometre long, so we will be busy for some time.

The Swale is an extension of the Maple Arboretum, and although no maples are visible in this video, they're not far away.

It was easy enough to get the truck in to position to pick up the debris from our removal of an invasive Asian grass. It was easy enough to turn the truck around with no more than a tight 3-point turn, Getting it out was a vey different matter. Waipa District Council's Parks Dept. staff came to the rescue with a sizeable tractor.

We had weeded this area earlier, and needed to mulch it to keep it clear. Now that Summer is coming, we are severely restricted in the planting we can do, and therefore we do maintenance work until next May.

Do fence me in

For some time now, we have known that the windbreak fence that keeps the southerly off our nursery has needed replacement. Today was showery and wet from overnight rain, so instead of going out into the field we stayed at the nursery and attended to a couple of fencing matters.

We have recently extended our lease from the Waipa District Council as we needed more room. We have about 25 people attending on a Tuesday and a dozen on Thursday, and as our nursery is just one section away from a busy intersection, parking on the roadside is tricky. The gate that the previous lessee used had to be closed off once we'd opened a gap in the fence between the properties, and this job was done along with the refurbishment of the windbreak.

Here is a little 3-minute video of the operation:

We are in the process of planting the stretch of reserve between the Waikato Expressway and the swale that drains the housing development next door. The idea is to abolish mowing. Unfortunately, the plants take a while to grow, and while they are doing so, the grass need to be mown. Neville has shown great skill in using a ride-on mower, and here he is for us all to see. This footage was taken on February 1, 2022.

Our lease of the Council's reserve land covers a defined area, and partly to make sure we stuck to our boundary, and partly to deter hooligans when the rest of the land is opened as a public park, we were asked to put bollards around the perimeter of the new carpark. The Council supplied the bollards, we hired a posthole borer and set to work last Thursday, 14th April 2022. It was a beautifully sunny day, warm but not hot, and ideal for outside work. This video shows how the job was done: