Lake Te Ko Utu in the centre of Cambridge has 5 different tracks leading down to it from street level. (number 5 on the inset map) 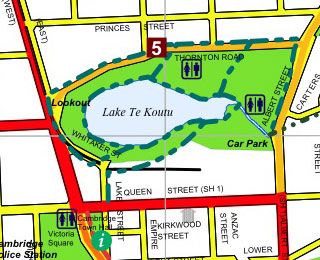 These walks are completely different from those described earlier in our list. Here we're into groomed grass and picnic areas. Parking, a barbeque and toilets are available at its eastern end off Albert St.

Control of drainage and water levels is problematic, and there appears to be a struggle for living space between eels and ducks in the park.

A Cedar of Lebanon was planted in the garden in 2008 as part of a world-wide acknowledgement of the trauma inflicted on Lebanon by recent wars.

Above the south-west side of the park is a Camellia Walk developed by the Tree Trust.

In late 2021, some of the more recently-planted camelias were removed. They were allegedly self-seeded and were "not great specimen." according to a Council source. We thought that we should give some of the history of this track as part of our effort to prevent further depredations. Here are some extracts from the local Cambridge newspapers of the times:

1962: Col. Durrant, a NZ camelia expert, congratulated the Beautifying Society on the selection of the site for a very fine project. The Beautifying Sociey planted 160 camelia in a range of varieties at a cost of 120 pounds ($240 at currency conversion date. According to the Reserve bank's inflation calculator, that is $11 278 in the 3rd quarter of 2021.)

1965:.Rotarians cleared an area around the camelias. The camelias have thrived and should form the nucleus of a beauty spot in Cambridge.

1967: A suggestion was made that hte camelia gardens behind the railway goods shed be moved as they were not accessible. The Cambridge Beautifying Society deferred a decision to move them as the Borough Council had done considerable maintenance work and would make the garden accessible.

1968: Clearance has occurred from the Lewis Path along the railway line to make the camelias accessible.

1975: A citizen's comment: "For a peaceful stroll I recommend a walk in the camelia gardens where they are blooming in all their glory."

1994: Camelia Grove behind the railway station is in full splendour. Over 120 camelias of 14 different varieties.

2016: Waipa District Council said that, at the Lakewood development, no trees on public land will be felled.

In memory of Brian Mayo, a seat has been placed at the top of the north-east bank overlooking the lake.

Blackie spent many hours working on the bank below the seat; so many that we commonly refer to it as Blackie's Bank. The seat is behind the Girl Guide's hut, through a fence beside the tennis courts.

Replanting the bank after the old gum trees were removed is a big job.

Here are some helpers on Arbor Day 2014.

We've had a lot of help from the public, in particular, the Chamber of Commerce's First Fifteen group. Here's a video of the early replanting work, this time from 2015.

St. Peter's at the Lake

This year's International Baccalaureate students from St. Peter's School worked hard on the steep slope of this bank. Replanting following the removal of gum trees is a big job and will take some years to complete. We are very grateful fro the help we get from young, energetic students like these.

We've had a lot of rain lately, (26th June, 2016) so I thought I'd check out Lake Te Ko Utu and its unofficial watercourse. The new plants are holding well, but they're not yet big enough to do the job of water retention that the old gum trees were doing.