The Meadow Walk- a path for all seasons

The Meadow Walk is on the Leamington side of the Waikato River, opposite Lola Silcock Park.

It is intended to be just as its name says, a walk across a meadow, surrounded by trees. Most of them are natives, but there is a fruit grove, along with several fruit trees close to the track so that their fruit may be readily picked in due season, and there will be a patch or two of English trees for autumn colour. The 50 fruit trees marking the Cambridge Lions 50th anniversary have been planted there.

The area had been grazed by dairy cattle. The project was about one-third complete in 2013 and only stages one and two at the Rivergarden end had been retired from grazing. As part of the campaign to clean the water of the Waikato River, the Cambridge riverbank reserve land is being retired from dairying. The Waikato River Clean-up Trust is financing the purchase of plants, fertiliser, weed mat and other items which will be used from time to time, and we are getting considerable support from local nurserymen.

The land involved in this project runs from the end of Alpers Ridge in the Rivergarden subdivision to Fletcher Place, where the Poets Track and Steelway join the Meadow Walk. It is edged by a high and very steep bank down to the river, and on the other side, by a scarp leading up to flat land which is fenced off and will continue to be available for grazing. There are two swampy areas, and we have planted flax there. It is a very big area to be tackled by part-time retirees, and we are very appreciative of the help we get from the International Baccalaureate students at St. Peters School.

The idea of a walking track through Waipa District Council reserve land between Alpers Ridge and Fletcher Place had been discussed for a number of years. Initial barriers of encroachment by adjacent property owners and the need to retire part of a grazing lease had to be overcome. After much discussion with WDC staff and lobbying from Tree Trust members, permission for this major project to proceed was given in 2011. Early in 2012 WDC assisted with the relocation of fences and the construction of stiles. Under the guidance of Joan McCathie, funding was gained from the Waikato River Clean-up trust and a 5-year plan formulated. Stage 1 was 2012, and involved the erection of a 1500 metre fence separating a fragile steep bank from grazing, planting over 4000 mostly native plants and forming a walking surface. Grazing was progressively phased out over the next 4-5 years.

The walk is close to the riverbank and passes through a variety of landscapes- meadow, wetland, wildflowers, food forest, English woodland and native regenerating forest. It is a major undertaking that took over 5 years, but it adds real variety and interest to local walking tracks.

When the Lions wanted to celebrate their half-century in Cambridge, they looked around for a suitable project and found our Meadow Walk. It suited them very well, and after discussion, they decided that they would plant 50 fruit trees along the track so that people could pick fruit as they walked along. That's assuming the possums and birds leave any.

The little video below shows the planters in action. Neither the Lions nor the Tree Trust are big on speeches, so there are none to show here. We all just planted trees.

Progress to the end of the 2012 planting season, i.e. early October.

The video below is a composite of three, and shows the land before work started, the students from St. Peters School, and the cutting of the track through the grass and swamps. The state of the land after grazing is evident, as is the encroachment of private sections on to reserve land.

This part of the project was guided very largely by CTT member Jane Moodie. The permanent loan of a post-hole borer has sped up planting substantially, and assistance from the Hamilton branch of Advance Training Centres Ltd. has put a rocket under it. The result is that Stage 2, which we expected to take all season, was substantially finished by mid-August.

There were a lot of losses during the summer drought this year, so we have had to do some remedial planting in the Stage 1 area, but despite this, survival rate was surprisingly high. The drought was severe, and caused great concern in farming circles. One thing we found was that the carpet we put around the plants to keep weeds down also kept water away. We found the soil quite dry under the carpet, despite rain in the previous 2 days. We no longer use carpet.

This year we had a different group of Baccalaureate students from St.Peters School. Here they are, hard at work on two of our projects.

The first job they had was to plant a roadside bank opposite the marae on the road to Te Awamutu. This is a little job to make a bare bank more attractive and so improve the entrance to Cambridge from that direction.

The second part of the students' morning was spent planting in stage 2 of the Meadow Walk project. This is where the track runs along the top of a bank that falls steeply to the river via a good deal of gorse. Thanks to the help we have had from St.Peters and the Advance Training Centre in Hamilton, this section has been finished about 6 weeks ahead of schedule.

The students came back for a second planting on the 22nd September. Numbers were down because there was an athletics program at St.Peters, and helping there also qualifies as Community Service. Here is a video of this planting:

This summer, 2014, we have put a seat at the top of the short rise from the flat at the Alpers Ridge end of the track.

We have called it "Falcon's Rest" because a karearea has been seen there. These birds are endangered, and although the local bird life doesn't agree, we are pleased to see karearea appearing regularly in Cambridge town.

The plantings on both sides of the track in Stages 1 & 2 have been mulched this summer (2013/14) and spraying has been done on Stage 3 to get it ready for planting this winter. Spring and early Summer 2014 reveal great growth in all plantings. Stage 3 plants are off to a very good start.

Here is a brief look at progress to September 2015. Some of the trees in Stage 1 are now over two metres high.

Here is an update as at September 2016. The growth last season was phenomenal. Warm, wet weather and carbon dioxide at 400 parts per million put the plants into overdrive.

Here is a collection of all the videos made about this walk from its inception up to December 2018. It runs for 50 minutes, and includes all the school pupils and adult helpers we have had on the project. It includes only a few of the many still photos that have been taken. Compiling them is another project altogether.

The 10th anniversary of our starting work on this project shows the wonders that climate change and carbon dioxide can do. The scruffy, muddy, pugged pasture that we started with is barely visible under all the foliage, so much so that we have had to thin some of it out. Here are a few pictures to show what 10 years can do. 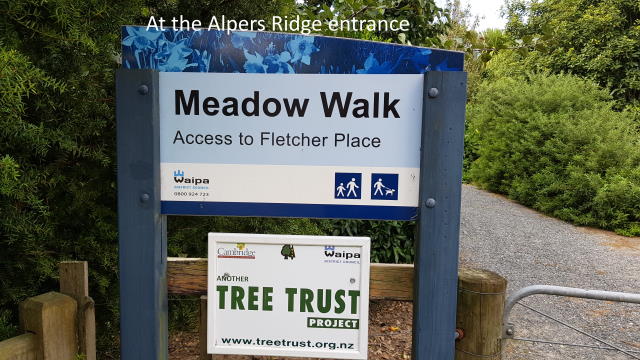 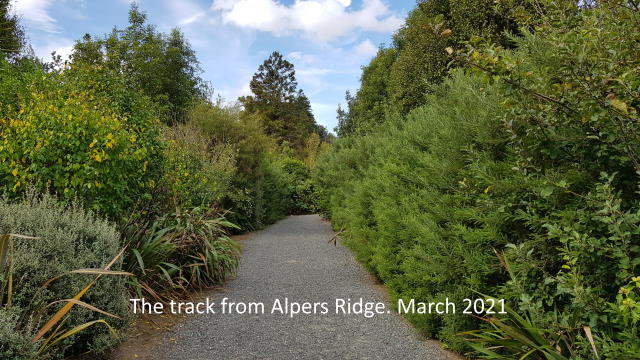 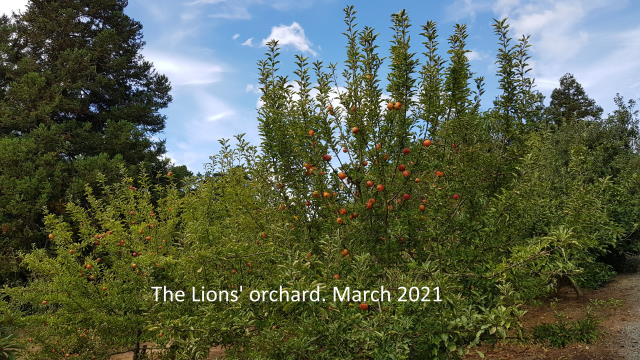 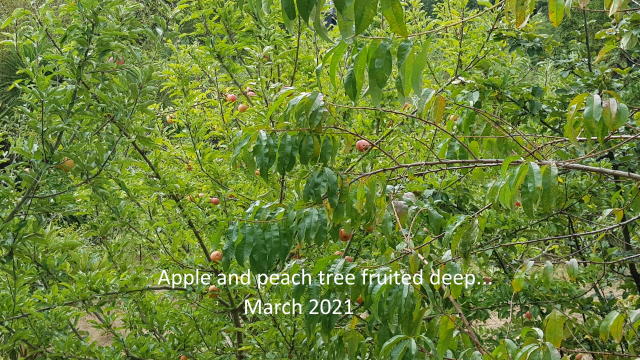 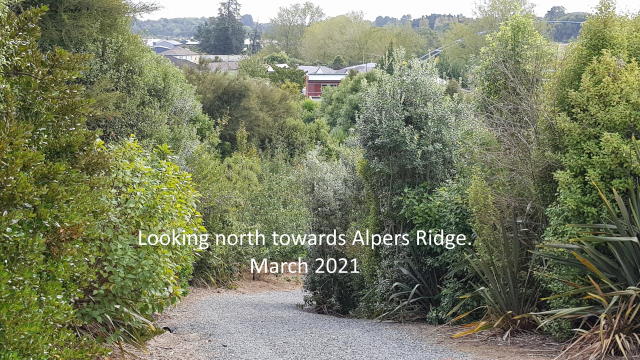 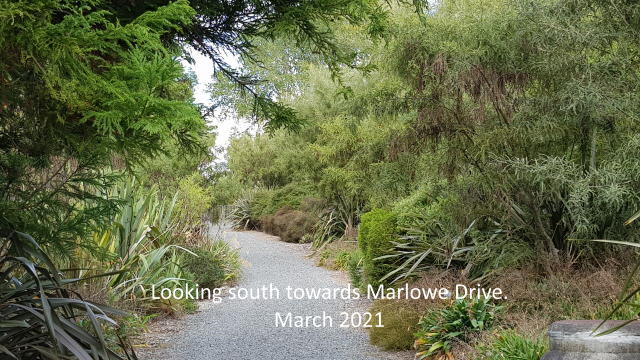 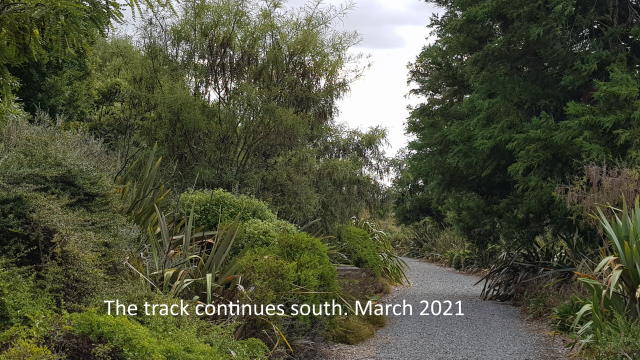 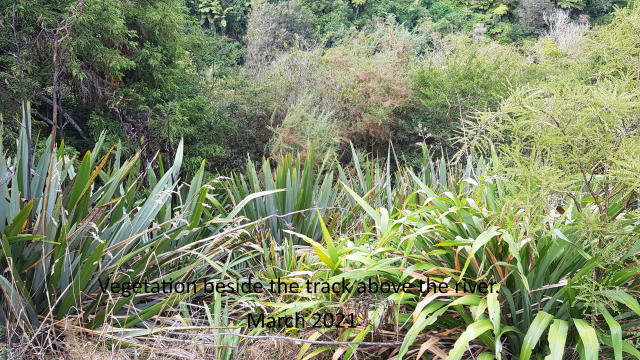 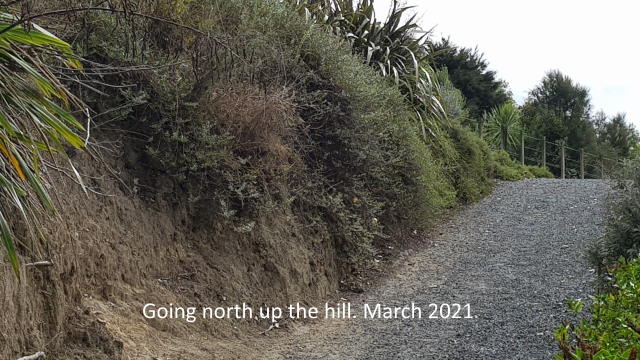 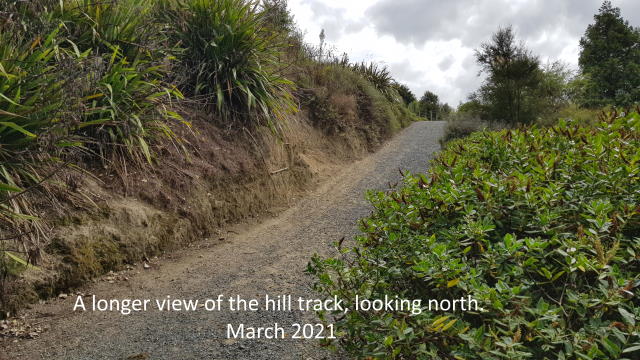 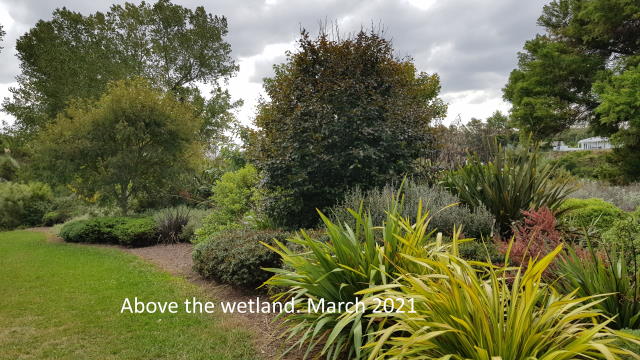 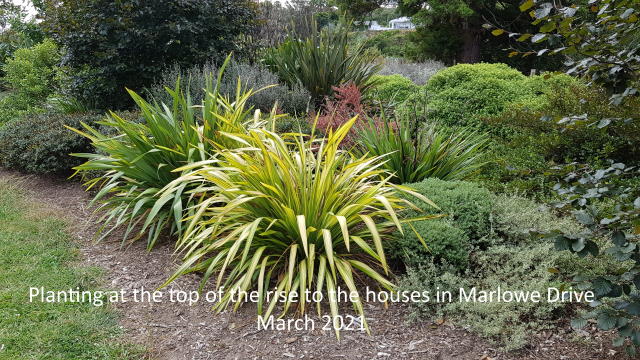 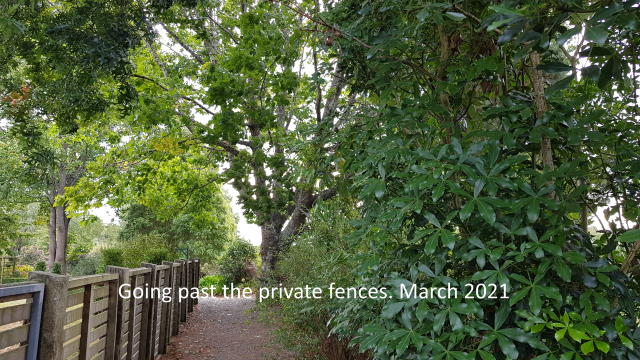 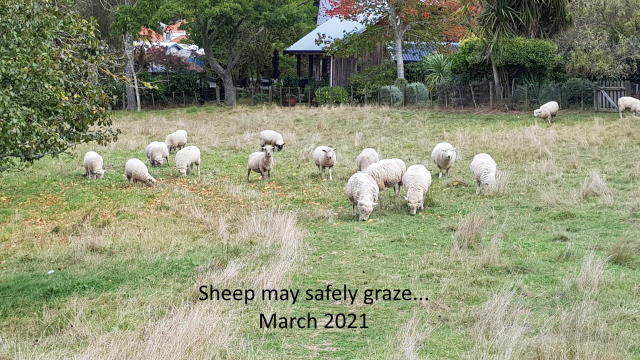 This little video shows us keeping one of our tracks tidy. Climate change produces vigorous plant growth, and maintenance has become a large part of our work.

After 8 years of warmth, rain and carbon dioxide, the trees in Stage One needed attention. This work coincided with the arrival of Covid-19 in March 2020. We got on to the job in earnest as soon as the country moved from Level 3 to Level 2. It meant keeping social distancing, and that meant each of us travelled in his own vehicle. Not the best, but it kept us safe. Working outside like this, keeping the correct 2-metre social distance was easy. However, it did mean we had to be very careful at morning tea time. When we moved to Level One, social distancing reduced to one metre, so morning tea became easier to handle. Our numbers went up too, as members who had been self-isolating returned. Here are a couple of photos of the result: 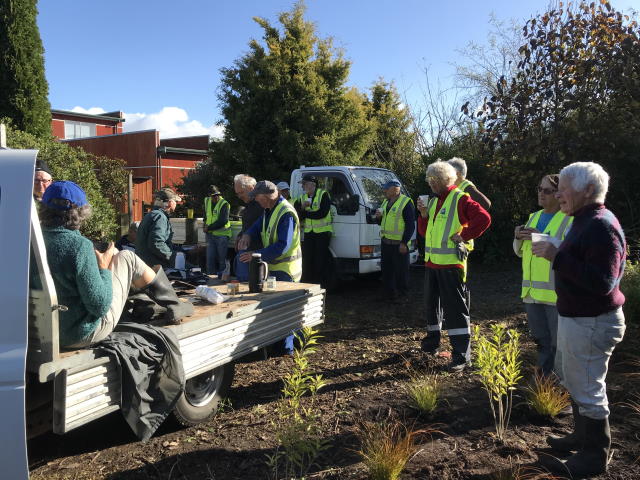 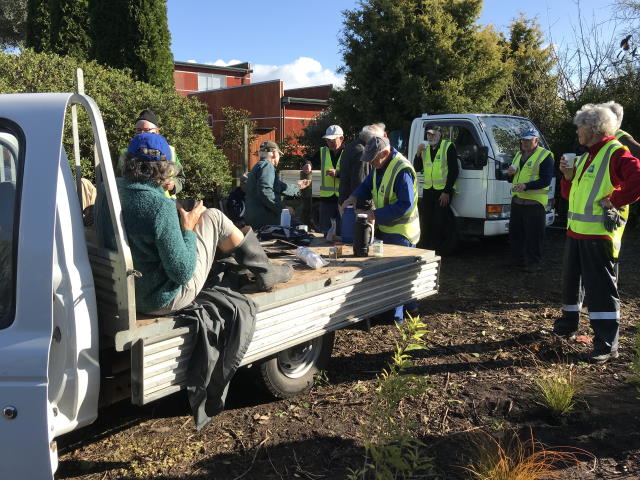