The nursery and shade house at 89 Thornton Road, Cambridge opened in February 2002.

Visitors are welcome. If the doors are open come on in.

The Nursery has power and water and we propagate 2-3000 trees a year.

The current premises are leased from the Waipa District Council.  Prior to 2002 the nursery was in the Gaslight Theatre area but as the ground was contaminated from the old coal-gas works, we were forced to move to our new premises. Here's a photo of the building under way: 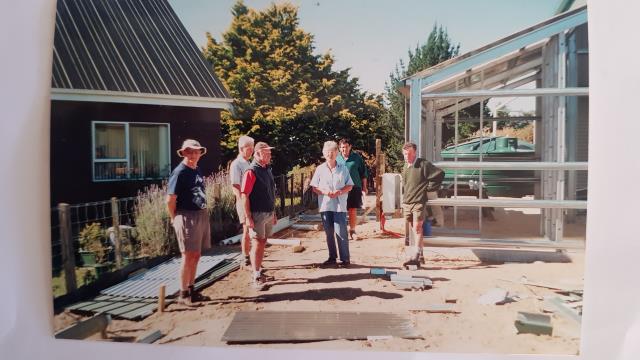 For many years, water supply was not a problem. We did put in a big water tank, but it was never properly connected and so didn't fulfil its purpose. We thought about it occasionally, but did nothing effective until the Council put in water meters in 2018. The prospect of being billed for our irrigation water focused our minds intensely. Even so, we had to make several attempts to get the system working. We found that the control valves had deteriorated over the 20 years or so that they had been in place. We bought new ones, re-arranged the piping and now the irrigation system works as it should, and we have still not been billed for water. The plentiful supply of rain this Spring has kept the tank full.

Sometimes even we can't go outside. This is what we did on 1st. September 2015 as the rain poured down outside. It's a very short video- only a minute and a half.

We have about 24 people coming on a Tuesday morning; sometimes more. Parking is getting messy. Some of us have to park on the grass verge, and some on the roadway. Thornton Rd has become a busy road as subdivisions have sprouted left, right and centre.
The paddock next door, like our own land, is Waipa District Council reserve. It was leased for grazing, and the lease was coming up for renewal. We asked if we could have it, and the lessee, being community-minded, said yes.
At the entrance to our nursery, there was a Brazilian pepper tree. It was an impressive tree, but invasive. It put up shoots which grew into tree trunks, and was becoming unmanageable. Auckland Council regard the species as a pest.
We decided we wanted to remove it. The job was too big for us, so the Council's people did it yesterday. Today, Tuesday 22 June 2021, Bruce and John got to work putting in a new border for the plot of land the tree grew in. This border will form one side of the entrance we will put in to allow access to our new carpark. The extra land will be planted in something. We're not sure what. There is room for some very big trees there.
Here are some photos of Bruce and John hard at work. 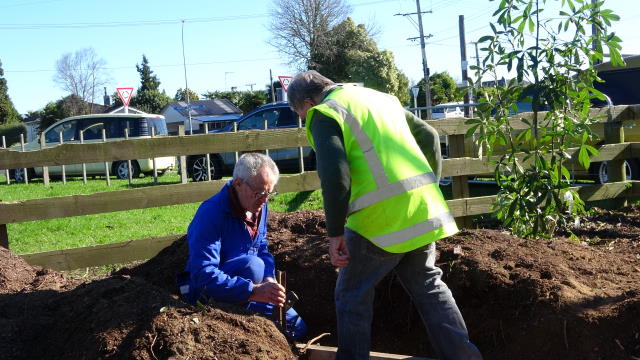 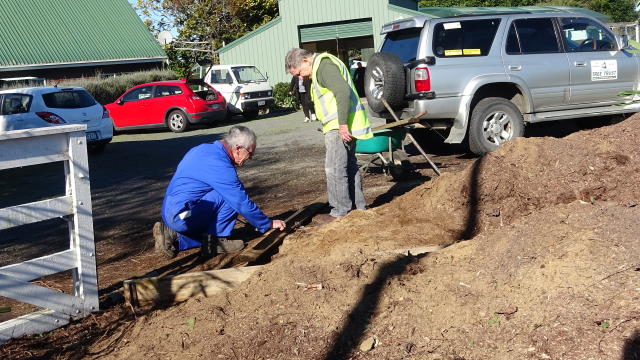 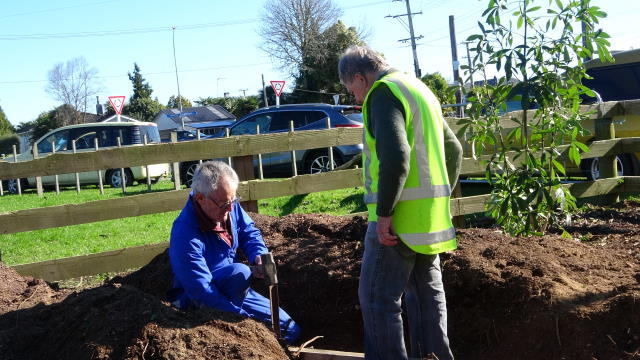 Initially, we were given just 20 metres square, but after a few weeks we found that we had been given the rest for planting. Two of these photos show our planning team laying out the planting scheme for final approval by the Council. The other shows the freshly-painted new fence that closes off the old gate to the horse paddock. 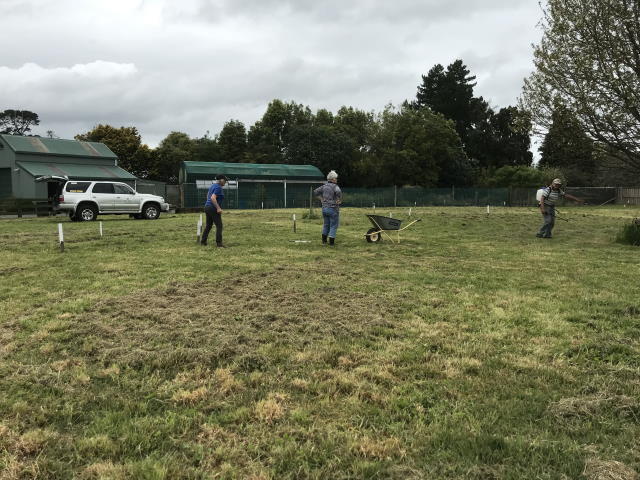 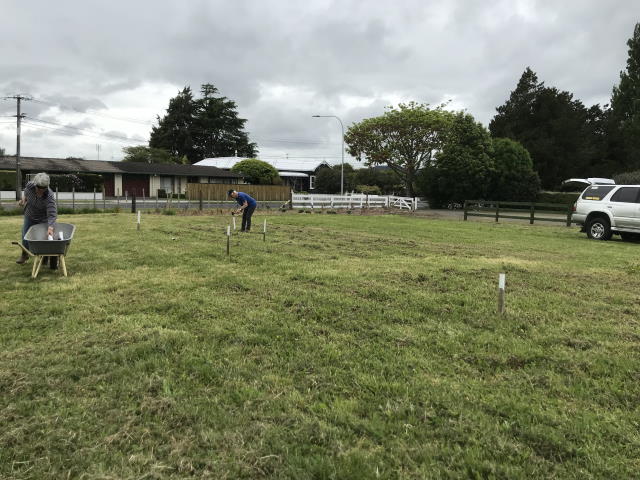 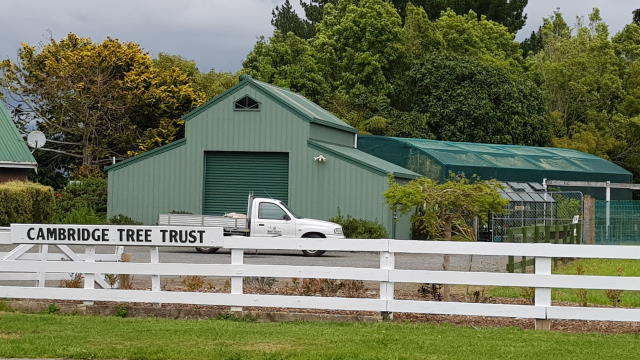 Today, 30th November (already!) we got rained off our planned work, so pottered about in the nursery instead. We weeded some of the plants in their pots, repotted some, and replaced some weed mat. We also planted the reserve land we have been given to plant beside our extended carpark. Here are some photos of this planting. We'll end up with a nice little park here, and may even put in a picnic table later, when the trees are bigger. 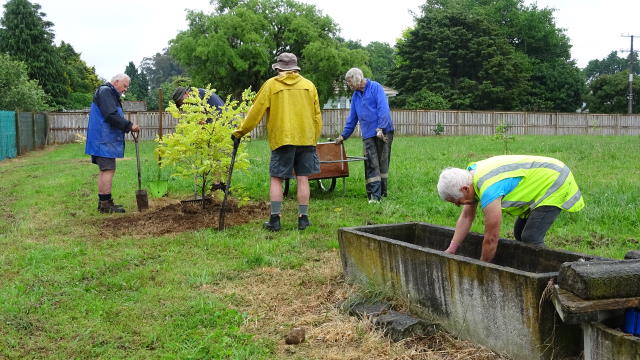 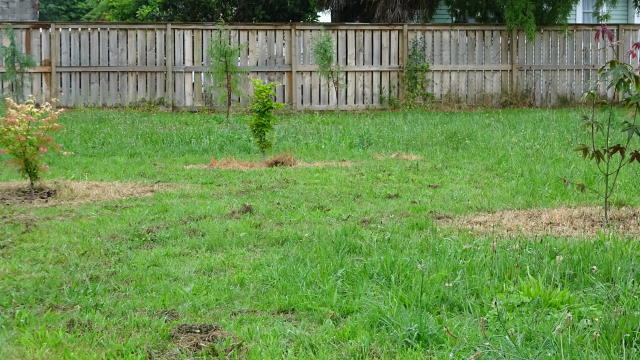 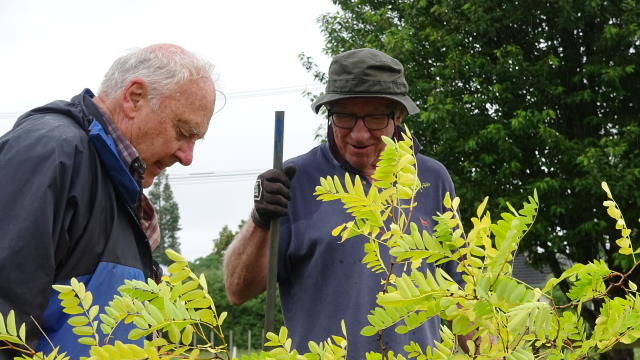 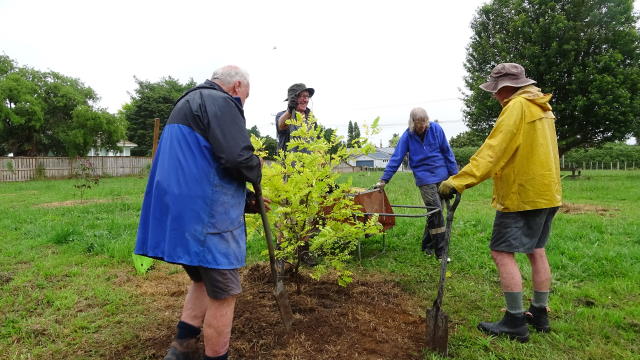 We had always thought it would be necessary to metal the new carpark. We could see it getting muddy and slippery in winter, especially at the two entrances. We got a very good price for the job, so went ahead with it in March this year, 2022. Here a post about it, put up by the people who did the job: We are very happy with the quality of their work, and the neat and tidy way they went about it.

Our nursery needs maintenance as much as our plantings do, but unlike them, it is sometimes necessary in the nursery to get down to, shall we say, bedrock.

We have found that weed mat has a finite life. It's plastic, and breaks down under NZ's ultraviolent light. We replaced some of it last year, and today we replaced another strip. This time it was tricky, because we had to work around a couple of poles holding overhead sprinklers for the irrigation system. We got there, and had our usual enjoyable morning tea along with the team that had been weeding and spraying in Brian Mayo Reserve.
This little 3-minute video shows us hard at work.

Do fence me in

For some time now, we have known that the windbreak fence that keeps the southerly off our nursery has needed replacement. Today was showery and wet from overnight rain, so instead of going out into the field we stayed at the nursery and attended to a couple of fencing matters.

We have recently extended our lease from the Waipa District Council as we needed more room. We have about 25 people attending on a Tuesday and a dozen on Thursday, and as our nursery is just one section away from a busy intersection, parking on the roadside is tricky. The gate that the previous lessee used had to be closed off once we'd opened a gap in the fence between the properties, and this job was done along with the refurbishment of the windbreak.

Here is a little 3-minute video of the operation:

Our new carpark has been extended to include the whole section. Whether any of it will be fenced off or not has yet to be seen. The section is still in grass, and will stay that way if we can manage it. However, grass has to be mown. Here is Jane, one of our members, using her mower to tidy up the rough first cut that the Council staff did.

Our lease of the Council's reserve land covers a defined area, and partly to make sure we stuck to our boundary, and partly to deter hooligans when the rest of the land is opened as a public park, we were asked to put bollards around the perimeter of the new carpark. The Council supplied the bollards, we hired a posthole borer and set to work last Thursday, 14th April 2022. It was a beautifully sunny day, warm but not hot, and ideal for outside work. This video shows how the job was done:

To enable all our plans to be completed
WE NEED YOU citizens of Cambridge TO ASSIST WITH TIME, MONEY and VOLUNTEER LABOUR.